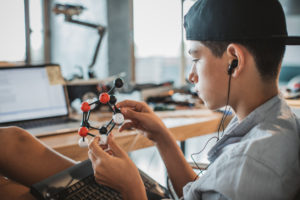 Last week I gave a presentation at a conference on twice-exceptionality run by a terrific organization called Twice Exceptional Children's Advocacy. My talk was on how parents can uncover their children’s strengths and interests, and help them develop their talents towards future careers and passions. I like giving talks about this topic because I believe strongly in the importance of developing children’s strengths, not just focusing on their weaknesses.

During the Q&A, I was challenged by a parent who described the idea of talent development as “pie in the sky” for her family. Another asked how to uncover strengths in a child who is non-verbal (not capable of spoken language). Another described a child who requires a full-time aide to manage explosive and disruptive behaviors. I believe these parent’s children may all be on the Autism spectrum. Because I don’t typically work with children who suffer from such severe symptoms, I felt ill-prepared to address their concerns. I’ve felt badly about it all week. So let me try.

It’s sad but true that individuals with Autism are woefully underemployed as adults. The employment rate among adults with autism is reported to be about 15-25%. A whopping 75-85% are unemployed. Your child has a better chance of being employed as a young adult if they have a learning disability (95%), speech/language impairment (91%), and even low IQ/intellectual disability (74%).

What are the opportunities for twice-exceptional individuals with autism? Famous media portrayals include Dr. Shaun Murphy in The Good Doctor tv show, most of the characters on the show Silicon Valley, Temple Grandin and Dan Akroyd. Individuals with autism may be especially good systematizers, have amazing attention to detail, and excel at visual thinking. Careers in computer programming, engineering, drafting, photography, mechanics, animation, accounting, inventory control, and statistics, may be good fits. Careers for nonverbal individuals with autism could include data entry, sorting, hand crafts, and assembly. Individuals with autism tend to not be as good at the social aspects of work and should generally avoid careers and workplaces placing a high value on social skills (e.g. marketing, sales). Workplaces that are tolerant of or seek out neurodiversity are more likely to provide a welcoming environment.

There is a growing awareness in the business world of the contributions individuals with autism can make in the workplace, and an effort to provide opportunities. A Wall Street Journal article this fall described a company called Daivergent that connects contractors on the autism spectrum with clients in need of their skill sets. Microsoft implemented an Autism Hiring Program in April 2015. Software corporations SAP, HP, and New Relic have dedicated autism hiring programs. An article on companies hiring adults with autism described several more.

I’m not arguing that opportunities abound, but there are some and they are increasing.

How can parents help their child with ASD identify interests and develop the skills needed to pursue a career? I don’t think talent development is a pie in the sky notion for anyone. We all have strengths and interests, and the twice-exceptional are gifted with more strengths than most. The key with a child who has a more impairing kind of autism is for parents and other professionals to look especially hard. Consider: What does the child like to do with his or her free time? What are his or her interests? What does he or she dislike? When and on what does he or she hyperfocus? In what areas is he or she gifted? Once the child’s strengths and interests are identified, deliberate efforts can be made to further develop the child’s talents. Simultaneously, any areas of weakness (e.g. behavioral) can be addressed through therapy and skill building.

Reach out for help. Organizations like Asperger Works, tools like Autism Speaks’ Spectrum Careers Toolkit, and coaches and advisors (e.g. www.integrateadvisors.org.) are available to help. In New York City, an organization called Spectrum Services has specialists who provide coaching for launching individuals with ASD into adulthood and employment placement.

It isn’t easy – especially for parents with children who have more extreme symptoms of autism. But I believe that there is always something we can do to try to help prepare our children for the future.