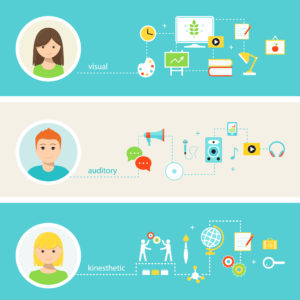 As many of our children head back to school they will be handed short self-report questionnaires to determine their “learning style.” A recent study found that over 90% of teachers still believe that children learn better if they receive information in their preferred learning style. Despite the evidence.

It’s a well-meaning notion – most teachers sincerely want to reach all of the children in their classes. And children generally find it fun to be given an opportunity to tell their teachers how they prefer to learn (of course many children would probably say they learn best by video gaming, but that isn’t likely to be among the options on the questionnaire!)

What are “Learning Styles?” There are more than 70 different theories or models of learning styles including: “left vs right brain,” “concrete vs abstract,” holistic vs serialist,” and so on. But by far the most popular model sorts children into three “types:” visual, auditory, and kinesthetic. The visual learner is said to learn best by seeing graphs, charts, videos, and other visual displays. The auditory learner is said to learn best though aural or heard information – by listening. The kinesthetic learner needs movement and hands-on tasks to maximize their learning.

The way students are identified as being one “type” or another is by filling out a self-report questionnaire with items such as: “I like to learn with posters, videos and pictures” and “If I have to solve a problem, it helps me to move while I think.”

Where did the notion originate? The idea likely grew in popularity from the combined effects of the self-esteem movement (all children are special and deserve respect of their differences), the need for teachers to teach a wide variety of children utilizing differentiation in mixed classrooms, and findings in neuroscience that different areas of the cortex have specific roles in visual, auditory, and sensory processing. I believe it caught on because it’s one of those ideas that sounds scientific and intuitively reasonable.

Is there any scientific evidence to support of the notion of learning styles? The answer is no.

And it’s not simply a matter of “the absence of evidence doesn’t mean the evidence of absence.” On the contrary, for years researchers have tried to make a connection through hundreds of studies. In 2009, Psychological Science in the Public Interest commissioned cognitive psychologists to evaluate the research on learning styles to determine whether there is credible evidence to support using learning styles in instruction. They came to a clear conclusion: “Although the literature on learning styles is enormous,” they “found virtually no evidence” supporting the idea that “instruction is best provided in a format that matches the preference of the learner.” Many studies suffered from weak research design, rendering them unconvincing. Others which did have effective experimental designs “found results that flatly contradict the popular” assumptions about learning styles. In sum, “The contrast between the enormous popularity of the learning-styles approach within education and the lack of credible evidence for its utility is, in our opinion, striking and disturbing.”

Students who implement study strategies based on their self-reported learning style do no better than students who don’t.

In addition, evidence shows that learning style questionnaires are unreliable because people’s self-reported preferences are poorly correlated with their actual performance. In other words, a person might think they learn better, say, visually rather than verbally, but their performance may say otherwise. And of course learning will depend on the nature of the material we’re being taught. Can you imagine trying to learn French grammar pictorially or learning geometry purely verbally?

What should parents do? If your child brings home results from a learning styles questionnaire, explain to them that what it means is that their teacher wants them to learn and that they should help their teacher out by letting them know when they don’t understand a concept being taught.