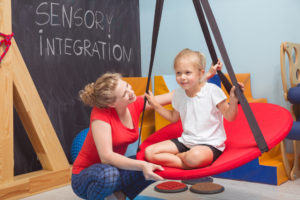 Sensory integration refers to the process by which the brain organizes and interprets external stimuli such as touch, movement, body awareness, sight, sound, and gravity. Sensory integration therapy is an occupational therapy intervention that uses individually tailored  activities in an effort to facilitate adaptive responses and functional behaviors. The therapy sessions typically involve months to years of 1-3 times per week, 30-60 minutes sessions and some homework.

Practitioners of sensory integration therapy propose that there is something called "sensory integration dysfunction" or "sensory processing disorder" that impairs the central nervous system, affecting the vestibular, proprioceptive, and/or tactile systems. The vestibular system provides sensory input to the brain about the body's movement through space. Ostensible signs of vestibular impairment include poor posture and dyspraxia (difficulty planning motor activities). Therapy intended to stimulate the vestibular system might include swinging, rolling, jumping on a trampoline, or riding on scooter boards. The proprioceptive system provides sensory input from the muscles and joints. Proprioceptive impairment is said to be revealed by the presence of stereotyped body movements, such as flapping one's hands or rocking one's body back and forth. Impairments in the tactile system are supposed to be evidenced by over- or under-sensitivity to sensory stimuli. Activities to stimulate the proprioceptive or tactile systems might include "smooshing" the child between gym pads or pillows to provide "deep pressure," brushing the child's body, providing "joint compression" by repeatedly tightening the joints at the wrist or elbow, and playing with textured toys.

The goal of sensory integration therapy is to remediate sensory difficulties so the child's overall functioning will improve over time, and allow the child to process and react to sensations more efficiently.

Is there really such a thing as a "Sensory Processing Disorder?"

Practitioners of sensory integration therapy are the sole users of the terms "sensory processing disorder" and "sensory integration dysfunction." The prevailing view in the broader scientific community is that "sensory symptoms" are ill-defined for purposes of diagnostic categorization and also for identification of a course of treatment or intervention. Sensory "issues" are seen as a nonspecific indicator of neurodevelopmental immaturity rather than as a distinct disorder.

In 2012 the American Academy of Pediatrics (AAP) issued a policy statement recommending that pediatricians not use sensory processing disorder as a diagnosis. The AAP left the window open for therapy by adding that while there may not be a diagnostic category, occupational therapy using sensory-based therapies "may be acceptable as one component of a comprehensive treatment plan."

Why would sensory integration therapy be recommended for a child with Asperger's/autism?

Many children with Asperger's and autism have "sensory issues," such as over-sensitivity to touch, sounds, smells, tastes, brightness, and movement. They may have trouble tolerating scratchy clothing, shirt tags, or "squishy" substances on their skin. They may be overly sensitive to loud noises or very picky about what they eat. They may evidence repetitive motor acts such as hand flapping. These difficulties can make ordinary situations overwhelming, create extreme stress, and trigger meltdowns. In fact, the latest edition of the American Psychiatric Association's diagnostic manual, the DSM-5, lists sensory problems as a criteria for autism diagnosis.

Similar symptoms may occur with other neurodevelopmental and behavioral problems, especially ADHD and anxiety. My daughter, who has both, had sensory integration therapy. She couldn't tolerate labels in clothing and loud noises (automatically flushing toilets were to be avoided at all costs). After a family vacation to Disneyland where she was overwhelmed by the noises and smells, she said "that would have been a great vacation except for that awful theme park." For the most part, she's outgrown her sensitivities. And I think she would have outgrown her sensitivities without a year of OT. But many children with autism continue to have sensory issues of one kind or another throughout their lives.

Is there a sound theoretical argument for sensory integration therapy?

Not really. A major limitation with sensory integration theory is the dearth of evidence for its main tenet, which is that the integration of sensory input is necessary for higher level functioning. This tenet is based on the outmoded view that the development of the child mirrors the evolutionary development of the species. The argument is that sensory systems arose relatively early in the evolutionary history of humans and were a prerequisite for the emergence of more complex cognitive skills. The vestibular, proprioceptive, and tactile systems are thus said to reside in the "primitive" subcortical pathways that need to develop before the formation of more advanced cortical systems. There is no sound scientific basis for this idea, and it sounds a lot like the specious arguments made by Brain Balance Centers (see my Myth Busters Blog on that topic). Rather, the functional organization of the nervous system is better conceptualized as a co-occurring and interactive network of cortical and subcortical systems that mediate voluntary and involuntary responses to stimuli. As such, a linear model that posits that one system must reach some prerequisite level of development in order for a "higher" system to function properly is just inaccurate.

In some of the sensory integration literature biological theories are complemented by hypothetical constructs such as "inner drives" for self-actualization, "sensory deprivation and/or overload," and "sensory defensiveness." These constructs do not have any demonstrated scientific basis or even clear definition that would permit their valid and reliable measurement.

O.K. So maybe there's not much scientific logic to support the theory. But does it work anyway?

I took a close look at four analyses published since 2012. Lang, et. al.  reported in 2012 in the journal Research in Autism Disorders that when 25 studies were analyzed, 3 studies suggested it was effective, 8 studies found mixed results, and 14 reported no benefits. Not very compelling. Many of the studies (including the 3 that found positive results) had "serious methodological flaws" (e.g. no experimental design), precluding any valid conclusions. The authors concluded: "There is insufficient evidence to support the use of sensory integration therapy for children with ASD."

Case-Smith and Scaff reported in 2014 in the journal Autism that among 5 studies, 1 was a case study so could not be generalized, 1 found no treatment effect, and the other 3 had mixed results. Of the 3 with mixed results, one utilized scientifically rigorous methodology (e.g. a control group). The findings from that study were positive according to parent and teacher report: children who received sensory integration therapy had a greater reduction in ASD symptoms. However, the authors cautioned: "additional rigorous trials using manualized protocols for sensory integration therapy are needed to evaluate the effects for children with autism spectrum disorders."

Finally, there is a chapter on sensory integration in the 2015 book  Controversial Therapies for Autism and Intellectual Disabilities: Fad, Fashion, and Science in Professional Practice by Foxx and Mulick. In addition to reporting in detail on prior studies, the authors report their own review of  data from 2011-2014. When they analyzed 10 studies, 3 were single-subject (one child) studies that did not show any benefit. 4 studies reported positive results but were criticized as "speculative at best" because they did not randomly assign children to groups and examiners were not "blinded" to group assignment. The 2 studies that did utilize sound scientific methodology provided inconclusive results, The authors conclude that sensory integration therapy has "limited scientific support," but note that it "remains popular despite professional ethical guidelines that call for the use of evidence-based practice." In other words, they feel it's unethical for professionals to recommend sensory integration therapy because its not an evidence-based practice.

Why do families engage in sensory integration therapy if the evidence is so scanty?

In an online survey about 60% of parents of children with ASD reported that their children engaged in a course of sensory integration therapy.

Why do they do it given the weak scientific evidence?

Maybe they haven't looked at the science. Maybe they were convinced by the pseudoscientific arguments. Maybe they hope scientific research will someday catch up with practice and show it to be efficacious. Maybe they relied on a story from a friend or a friend of a friend that was convinced it helped their child. I think this happens a lot. Or maybe parents are so desperate to do anything to help their child they will grasp at straws.

Recommendation: While it probably won't do much, if you want to do sensory integration therapy as one part of a comprehensive treatment plan, there's probably no harm in proceeding. But please don't divert time, money, and attention away from therapies that are scientifically validated as effective.