Where does the concept of overexcitability come from? 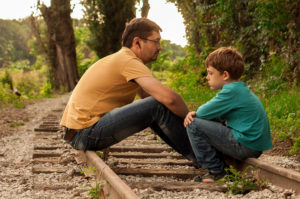 Overexcitability was introduced to psychology by Polish psychiatrist Kazimierz Dabrowski in the 1960’s as part of a “Theory of Positive Disintegration.” The theory proposed that psychological tension and anxiety are necessary to achieve the highest levels of personal and moral growth. Hence these “disintegrative” processes (tension and anxiety) were seen as “positive.” Dabrowski believed that some people have more “developmental potential” than others, and that high intelligence (giftedness) and overexcitability were predisposing factors.

So what exactly is overexcitability?

Dabrowski defined overexcitability as a heightened physiological experience of stimuli resulting from increased neuronal sensitivities that cause a person to experience life more intensely and to feel the extremes of joy and sorrow more profoundly. He called it a “tragic gift.”

He outlined five forms which have been elaborated by others over the years:

Psychomotor overexcitability manifests as a capacity for being active and energetic. It can include loving to move and being physically active, restlessness, speaking quickly, frequent impulsivity in action, and having high stamina.

Sensual overexcitability manifests as increased pleasure from the senses (e.g. tastes, smells, textures, sounds, and sights) and, conversely, extreme negative reactions to unpleasant sensations. It can include an exceptional dislike for particular stimuli or sensations, like the sensation of a shirt’s tag on one’s neck or the texture of certain foods.

Intellectual overexcitability manifests as an extreme desire to seek understanding, gain knowledge, and analyze and categorize information. It can include asking a lot of questions, being a quick thinker and observer, love of ideas and theoretical analysis, and the search for truth.

Imaginational overexcitability manifests as an intensified play of the imagination and vividness of imagery. It can include fantasizing, day-dreaming, a craving for novelty, and dramatization.

Emotional overexcitability manifests as a capacity for feeling emotions intensely and deeply. It can include being highly sensitive, empathetic, anxious, sad, lonely, nervous, fearful, having a heightened sense of responsibility, and a tendency toward self-examination.

What’s the link between giftedness and overexcitability?

Dąbrowski's followers suggest that the gifted disproportionately display overexcitabilities, positive disintegration, and hence the potential to attain higher levels of personal and moral growth. The notion was popularized in the gifted education and research communities by Michael Piechowski initially in the 1970's, Sal Mendaglio, who edited the book Dabrowski's Theory of Positive Integration (2008), Susan Daniels and Michael Piechowski, who edited Living with Intensity (also published in 2008) and by Linda Silverman of the Gifted Development Center in Colorado, who worked with Piechowski and others on the development of the Overexcitability Questionnaire II, a self-report form widely used as a research instrument. You can try it out yourself by following the link.

I think parents find the concept appealing because it links giftedness and experiences and behaviors that could otherwise seem problematic or dysfunctional (like melt-downs over labels in clothes and extreme emotional reactivity), suggesting these are just part of the child’s gifted temperament. I personally found solace in the idea when my daughter was hypersensitive as a young child. However I have seen parents who take it to an extreme by attributing everything to only one aspect of their child’s profile (their giftedness), and ignoring areas of challenge that need to be addressed.

Is a link validated by the research?

I don’t think so. But I may get in trouble with my friends and colleagues in the gifted community for saying so. The idea that overexcitabilities are higher in the gifted has so captured the imagination and loyalty of researchers, practitioners, and parents that it has, in effect, become accepted as an article of faith or ideology. Practically every website and book written for parents on the social and emotional aspects of giftedness promulgates the view. There’s very little debate about it in the presentation to the public – it’s simply accepted as truth. That's why I'm writing about it. It bothers me when everyone jumps on the same bandwagon without questioning where it’s going. Also, I have a problem with the idea that the gifted are more capable of attaining higher levels of moral and personal growth than the non-gifted.

Let’s look at the research literature:

On the “pro” side, in 1984 Colangelo and Piechowski summarized the literature, noting that overexcitabilities were consistently present in the gifted. Falk and Miller conducted a literature review of 28 studies in 2009, reporting that gifted individuals were significantly more overexcitable than the non-gifted, especially in the Emotional, Intellectual, and Imaginational areas. In Taiwan, Kuo and Chang (2013) concluded that gifted persons are significantly overexcitable. Many professionals involved in counseling the gifted (e.g. Linda Silverman, Ann Marie Roeper, Susan Daniels) have cited their personal professional experience as evidence that the gifted are more intense, sensitive, and overexcitable.

Why, then, is there such a strong ideology built up around this notion?

This makes me wonder why the gifted community has been so dogmatic about its belief in overexcitabilities, despite the lack of empirical evidence. It may be that people decided they liked the idea when it was just a hypothesis and haven't kept up with the research findings. It was striking how fast thought-leaders in the gifted community jumped on the wagon when the hypothesis was first popularized in the 1980's, despite a near total lack of any evidence at the time. I think it could also be due to the “halo effect.” Professionals in the gifted community want to see the people they work with through a positive lens. For parents, the idea that their child is oversensitive as part of their giftedness and that's a good thing may be more appealing than an additional diagnosis of AHDH or Asperger’s or anxiety. Finally, we all want to think that pain and suffering will prove, in the long run, to be for the best. We want to believe it, and so we do.

Why does this matter, and what should parents do?

It matters because making the assumption that a gifted child is more excitable because they are gifted and that it's fine (even good) to be that way can focus attention away from challenges that need to be addressed. Let’s remove the halo of giftedness, and look at the whole child. The potential for a child to realize their potential and to grow into a happy and productive (and personally and morally developed) member of society is increased when we support both their strengths and their weaknesses.