The Tipping Point for 2e 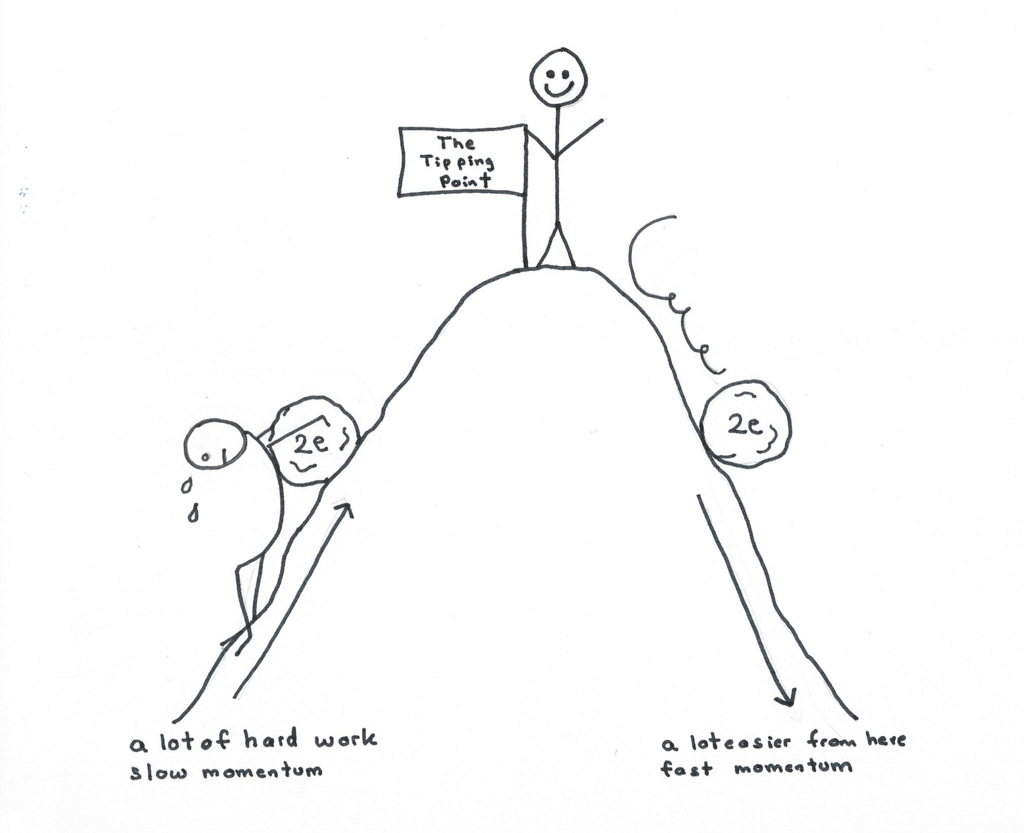 Twice exceptionality is both a fact and a movement. And the movement is finally taking off!

It’s a fact, because it’s proven that individuals can be simultaneously very intelligent and have something else – a disability or difference like ADHD, autism, dyslexia, or anxiety that can work against the expression of their abilities.

It’s a movement because not too long ago many people dismissed the idea that individuals could be 2e. My children’s teachers and some of my closest friends dismissed it. They had trouble wrapping their head around the idea that intelligence doesn’t automatically predict high achievement. That someone could be smart yet not be able to spell or memorize math facts or read other’s emotions. I was incredulous. How could people see things in such a black and white way? I found myself questioning the intelligence of these doubting Thomases. Unpacking conundrums is, after all, a key aspect of intelligence.

Pioneering researchers, clinicians, parents, and 2e individuals have worked hard over the past 30 years to change that attitude. Sue Baum was one of the first voices to be heard in the 1990’s. Carol Mills and Linda Brody, the founders of John’s Hopkins' Center for Talented Youth’s Diagnostic and Counseling Center, wrote an article in 1997 that gave me hope for the first time as the parent of then 6 and 8 year olds. My children didn’t have to be defined entirely by their disabilities! It was a revelation. Then Meredith Warshaw founded the GT-Special e-mail list. The parents on that list became my confidants and advisers – my tribe.

Things accelerated in the early 2000’s. Linda Silverman, Kiesa Kay, Sally Reiss, Tina Newman, Deirdre Lovecky and others pushed the needle. They wrote about the “uniquely gifted,” “different minds,” and “upside down brilliance.” In 2003 the Twice Exceptional Newsletter was founded by Linda Neumann and J. Mark Bade (now owned by Bridges Academy as 2e News.) The term “twice exceptional” grew widely accepted as a workable term to describe such individuals. Alternate terms include: “differently wired,” “neurodiverse,” and, probably my favorite – “bright and quirky.”

The movement is really accelerating now. We are truly on the cusp of societal change.

Schools have been created to serve 2e learners. The number of online conferences, podcasts, webinars, and Facebook groups focusing on twice exceptionality has grown exponentially in the past three years. When I tell people I’m a specialist in twice-exceptional learners, I don’t get a blank stare anymore. Debbie Steinberg Kuntz hosted her second Bright and Quirky Online Conference in 2019. Julie Skolnik hosted a 2 Days of 2e Virtual Conference in 2018. Quad Prep – a school for 2e learners – hosted a Breakthroughs in 2e Education conference in 2015 which has become an annual event. Debbie Reber created the Tilt Parenting podcast in 2016 and published her book Differently Wired in 2018. Twice Exceptional Children’s Advocacy (TECA) has hosted two Building 2e Awareness and Community conferences on Long Island in 2017 and 2018. Started in 2018, Emily Kircher-Morris’ podcast Mind Matters focuses on gifted and 2e individuals. There are 12,000 members of the Facebook group Parents of Twice Exceptional Learners. An opinion piece I did on neurodiversity for NowThis has had 29 million views. People from all over the world keep reaching out to me and saying they want to help further the movement. There are plays on Broadway about 2e individuals (The Curious Incident of the Dog in the Night and Dear Evan Hansen) and portrayals of 2e people in t.v. shows (The Good Doctor, The Big Bang Theory, and Silicon Valley).

I think one reason we’ve come so far is because we’re fascinated by the stories of innovators in technology like Steve Jobs, Mark Zuckerberg and Bill Gates who seem twice-exceptional, or at a minimum very quirky. People are beginning to realize that innovators are out-of-the-box thinkers who may well be neurodiverse, differently wired, or bright and quirky. And people advocating for twice exceptionality have done a terrific job of getting the word out.

As a result, we’re at a “tipping point.” In sociology, a tipping point is found where a minority belief starts to become the majority opinion. Malcolm Gladwell describes this as "the moment of critical mass, the threshold, the boiling point." At this critical juncture, small actions can have large effects.

I can feel it. We’re on the edge of the tipping point. It’s time for society as a whole to accept the idea that the kind of neurodiversity twice-exceptional individuals possess is real and beautiful and deserving of respect and acceptance. Let's push the boulder over the hill together.