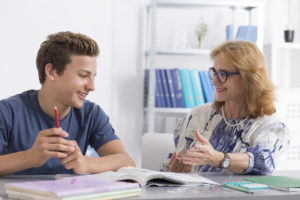 The term “executive function” often comes up when we talk about weaknesses displayed by twice-exceptional learners. Some parents even describe their child as having an “executive function disorder” or “disability.” But there’s really no such thing. You won’t find it as a stand-alone diagnostic category in the Diagnostic and Statistical Manual for Mental Disorders (DSM-5). And it isn’t a disability category recognized in educational settings for an IEP or 504 plan.

Executive function (EF) is a broad concept comprising many skills, including: inhibitory control; flexible thinking and the ability to “shift set,” emotional control; the ability to self-monitor; working memory; planning and organizing; time management; organization of materials; task initiation; and task completion. Perhaps the best way to visualize it is as the brain’s “control center.”

Children with ADHD often display executive function weaknesses in inhibitory control. They’re impulsive and act without thinking. Sometimes their impulsivity flows into the emotional arena and they aren’t able to control their responses before acting. They may be overly sensitive or too quick to anger. They often have difficulty self-monitoring their work and are prone to “careless errors.” Weak working memory (e.g. forgetting what one is supposed to be doing while doing it) is a hallmark of ADHD. A poor sense of time combined with difficulty delaying immediate gratification for long term rewards can result in poor task initiation, time management, and task completion.

Children with ASD usually present with a slightly different pattern of executive function weaknesses. Flexible thinking is a challenge. They tend to get “stuck” on ideas and ways of doing things, demonstrating rigid thinking. It can be difficult for them to “shift set.” Key aspects of shifting set include the ability to make transitions, tolerate change, problem solve flexibly, switch or alternate attention between tasks, and change focus from one task or topic to another. Mild deficits in shifting may compromise problem solving and result in a tendency to get stuck or focused on a topic or problem, whereas more severe difficulties can be reflected in perseverative behaviors and marked resistance to change. Poor emotional control and emotional dysregulation are also typically present in children with ASD.

Of course a child may have both ADHD and ASD, with executive function weaknesses characteristic of both.

I’ve also worked with children who do not have a formal disability diagnosis but have immature executive functions. These are children who forget to hand in their homework, leave long-term assignments to the last minute, and neglect to check their work before turning it in. As I write this I wonder - does this describe most teens?

The executive functions are housed in the frontal lobe of the brain. This is one of the last areas to develop as children mature.

But we don’t have to wait for skills to develop on their own. We can explicitly teach them.

Some schools incorporate this kind of teaching in their academic programs. A parent told me that the 6th  grade at their suburban public school is “all about executive function.” Of course one would ideally not wait until college, but there are entire programs and courses in executive function at colleges like Landmark and Lynn University. I’m not a huge fan of summer programs purporting to teach executive function skills as most of what needs to be learned should be practiced during the school year in a natural setting.

In the absence of a school program, most families have to tackle the issue outside of school. Parents can try to teach their child themselves (awfully tough for many families) or hire someone to do so. A whole industry has grown up in the last 10-15 years of executive function coaches or tutors. As there isn’t a license required to call oneself an “executive function coach,” and there is no standard of qualifications, I’m afraid it’s a “buyer beware” situation. To find a good coach, ask around and get a referral. A good one can make a world of difference.

Coaching usually works best when implemented on a regular basis over a fairly long period of time (months, at least). There’s no “quick fix” for most problems. The child should be involved with the coach in setting goals, practicing skills, monitoring progress, and ultimately becoming more independent as they are gradually “weaned” of support. A child of any age can benefit from strengthening the executive functions, but I feel it’s especially important to try to get such skills under your child’s belt before they go to college. For students with executive function weaknesses, college can be a perfect storm.

What can parents do? Be proactive and give your child the benefit of explicit teaching. Try not to get frustrated with your child's EF weaknesses, but rather see them as an area in need of support.

Executive Skills in Children and Adolescents, Third Edition: A Practical Guide to Assessment and Intervention by Peg Dawson and Richard Guare. This is, in effect, a manual for how to assess and teach executive function skills. I used this as my guide when I taught my son. Also by the same authors: Smart but Scattered: The Revolutionary "Executive Skills" Approach to Helping Kids Reach Their Potential.

Anything by Seth Perler an executive function coach par excellence who is also knowledgeable about 2e learners. Subscribe to his blog, take a look at his “Toolkit,” and listen to his interviews on TiLT Parenting (e.g. A Master Class in EF).