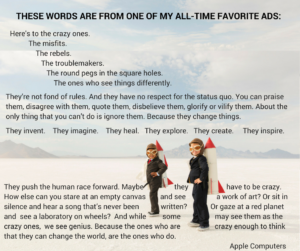 Brings tears to my eyes every time I read it.

As adults we respect and admire the accomplishments of renegades and creative minds like Leonardo da Vinci, Albert Einstein, Nikolai Tesla, Elon Musk, Steve Jobs, Richard Branson, Walt Disney, Vincent van Gogh, John Lennon, Steven Spielberg, and Robin Williams. They’re the inventors, imaginers, healers, explorers, creators, and inspirers who change the world. Without minds like theirs society would not move forward. We need them more than ever today.

But these very same individuals, as children, were the kinds of student teachers found most difficult, parents worried about and lost sleep over, and whose peers scorned or bullied them. Why? For the very same qualities that made them so successful as adults. Being different, rebelling against the status quo, refusing (or being constitutionally unable) to fit in, breaking or questioning the rules.

Most parents want their children to be happy, make friends, and do well in school and extracurricular activities like sports and music. Down the road they want them to get into a good college and launch a career that supports them and provides job satisfaction. Get married, have a family. Maybe they will even make a meaningful contribution to society.

But what many parents don’t realize or lose sight of in the trenches of elementary, middle, and high school is that for some children – especially twice-exceptional and gifted children – being “successful” in traditional ways as a child is not necessarily a good predictor of being successful as an adult.

I was guilty of this kind of myopic thinking as a parent myself, before an encounter made me rethink my values. My children were happy and had friends before formal schooling began, but once they started Kindergarten things began to go downhill. Teachers sent home notices about their behavior (inattentive, questioned authority, lacking focus, failed to complete assignments, etc.). Grades were spotty. Playdate invitations were less frequent than they would have liked. Uninterested in and not very good at organized sports, they were basically off the grid in terms of the kinds of extracurricular interests their peers were engaging in. The things they did like to do - building and taking things apart for my son and imagination and telling stories for my daughter – weren’t easily shared with peers and certainly didn’t give them any attention in the community. They were diagnosed with giftedness, learning disabilities, and ADHD, and I spent countless nights lying awake in bed worrying about their futures.

My “awakening” happened after an elementary school band concert when my then 4th grade daughter was called to the stage to play a clarinet solo she’d practiced for weeks in front of about 200 people. She stood there for a full minute rifling through her music and then said: “I’m afraid I forgot my sheet music for the piece I was supposed to play. So I think it’s appropriate under the circumstances to play “If I Only Had a Brain” by Harold Arlen and E.Y. Harburg.” I’m embarrassed to say now that I was mortified. I had hoped she’d play her piece brilliantly, reflecting glory on me as her proud parent. After the concert a man in front of me turned around and complimented her performance. I said, “Thank you – you’re too kind. It would have been nice if she had done the piece she practiced.” He responded: “You should be proud to have a daughter who can think on her feet, improvise, and deal creatively and with humor with the cards she’s been dealt. That’s much more important in the long run.” His words brought me up short.

I thought about it a lot. I realized I had wanted my child to excel in ways others in our community would judge to be impressive. How shallow of me! I had also been trying to shape her into some image in my mind of the “perfect” child. Top student, accomplished musician, popular, athletic. My own (questionable) values had gotten in the way of my appreciating my daughter for who she was and seeing the unique strengths she did possess. Inventive. Confident. Creative. Funny. Smart.

This was about the same time I went back to school for a PhD, so I was able to study motivation and achievement from a developmental perspective. I learned that the many of the attributes it takes to be a “successful” young student (compliance, diligence, eagerness to please, ability to memorize) are quite different from those required to be a successful older student and adult (challenging the status quo, intrinsic motivation, pursuit of one’s own interests, open-mindedness, a questioning mind). I also learned that individuals who pursue their genuine interests – and don’t let themselves be influenced by what everyone else is doing – are more successful as adults. Mihaly Csikszentmihalyi’s thoughts on the joy of experiencing “flow” and how flow is also associated with achievement were particularly inspiring. I learned that popularity through high school is negatively correlated with achievement in most fields for girls. And, as students move through school the demands shift from more lower-level tasks like memorization of math facts and tidy handwriting to higher-level tasks like reading complex text and understanding it. Thomas West’s ground-breaking book In the Mind's Eye (1997) about creativity in visual thinkers was the first to get me thinking about the possibility that even having a “disability” could confer certain advantages. Now I'm a firm believer that being wired differently can enable certain "superpowers" that most people can't tap into in the same way.

Children who are “different” have enormous potential. As parents, we should try to keep the long-view in sight. Applaud and develop our children’s individuality. Encourage their pursuit of unusual interests and passions. Let them know we value them the way they are, and don’t want them to try to be like everyone else. It may take courage, but the results are worth it. Our misfits, rebels, trouble-makers, and square pegs in round holes may be the ones who change the world.