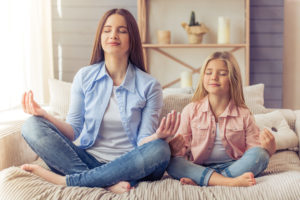 Mindfulness meditation has enjoyed a tremendous surge in popularity in the past decade. The practice has moved from a largely obscure Buddhist concept founded about 2,600 years ago to a mainstream psychotherapy and educational construct.

What is Mindfulness Meditation?

It's a technique of meditation that focuses awareness on breathing and encourages positive attitudes to distracting thoughts and feelings that are not ignored, but are rather acknowledged and observed nonjudgmentally as they arise to create a detachment from them and to gain insight and awareness. It involves training attention and awareness in order to bring mental processes under greater voluntary control. It promotes metacognitive awareness. Mindfulness meditation is a western adaptation of Vipasna, or mindful breathing meditation, with influences from other methods.

Other forms of meditation include: transcendental meditation, in which one sits in lotus position and chants internally with the goal of “enlightenment;” Kundalini meditation in which one tries to channel an upstream of energy and experience an altered state of consciousness; Qi Gong meditation from ancient China which utilizes breathing, movement, and posture to circulate energy through the bodies “energy centers;” and Zazen Zen Buddhist meditation, a straight-backed, seated meditation in which one aims to forget all judgmental thoughts, ideas, and images.

One of the main influencers behind the popularity of mindfulness meditation in the west is John Kabat-Zinn. Dr. Kabat-Zinn has written a number of best-selling books including: Full Catastrophe Living: Using the Wisdom of Your Body and Mind to Face Stress, Pain and Illness; Wherever You Go, There You Are: Mindfulness Meditation in Everyday Life; and Everyday Blessings: The Inner Work of Mindful Parenting. He approaches mindfulness as a scientist (PhD in molecular biology, MIT) and has published scientific articles in peer-reviewed journals (e.g. Journal of the American Medical Association) on mindfulness in medicine. His Mindfulness-Based Stress Reduction (MBSR) program, developed in 1979 at the University of Massachusetts Medical School, has been used in hospitals and health clinics to help patients improve the quality of their lives.

What has my personal experience been with it?

My 26-year old 2e son got me into it. He gave me Full Catastrophe Living for Christmas and we did an 8-week self-guided MBSR meditation course based on Kabat-Zinn’s teachings. We’d text each other when it was time to meditate then text again afterward and call to chat about the experience. I also took a 6-week online course from Mindful Schools for educators. I still feel like an amateur! In my experience this is not something one can read a book about or take one course and immediately implement successfully. I think that’s one reason it’s called a “practice.” You have to practice a lot to get it down and even then you may lose direction. My son, who has been practicing on a daily basis for several years now, feels it is very helpful for improving his attention and focus (he has ADHD) and for reducing anxiety and a tendency to ruminate on negative thoughts. He thinks one of the biggest challenges with implementing it as a “treatment” is that teaching and coaching methods are not standardized and one often doesn’t know if one is “doing it right.”

How could it help 2e learners?

Mindfulness meditation could help 2e learners who have ADHD, autism, anxiety, and/or depression. The following benefits are mentioned:

A 2017 article was published by science reporter Brian Resnick on Vox.com called: Is mindfulness meditation good for kids? Here’s what the science actually says. Resnick read more than a dozen studies — including systematic meta-reviews, which accounted for thousands of other papers — analyzing the research on mindfulness in both children and adults (there was much more research available on adults). He writes: “The evidence for mindfulness in adults is limited but promising” – especially for anxiety, depression, and stress reduction. He found less evidence for children, in part because there were so few studies.

Dr. Erica Sibinga, a pediatrician  at Johns Hopkins, conducts well-controlled trials using mindfulness in Baltimore’s poorest public schools. She and her colleagues recently conducted a randomized clinical trial with 300 fifth- to eighth-graders. Half the students got mindfulness instruction for 12 weeks. The other half got 12 weeks of health education and were the study’s controls. The results were quite strong: depression, anxiety, self-hostility, coping, and post-traumatic symptoms moved from "concerning levels" to "normal levels."

A 2014 review published in Frontiers in Psychology found, across 24 studies (11 which had not been published in peer-reviewed journals), that mindfulness improved measures of cognitive performance but had less impact on stress and coping.

A second 2014  meta-analysis published in Education Psychological Review looked at 15 studies of school meditation programs and found “school based meditation is beneficial in the majority of cases,” but “the majority of effects of meditation upon student outcomes are small.”

And a third meta review, published in the Journal of School Psychology in August 2017, compiled 72 mindfulness studies of youth both in and outside of classroom settings. They found “universally small, positive therapeutic effects” for attention, introspection, and emotion regulation.

Overall, the evidence suggests that mindfulness does appear to have a positive effect for children, especially on anxiety and cognitive measures. The studies suggest that it is most beneficial for children who are disadvantaged or at-risk, and may not be as effective for children who are closer to a "normal" baseline. I feel our 2e children are "at-risk" and stand to benefit.

How do you teach a child how to do it?

Some schools incorporate the teaching of mindfulness in the school day. Mindful Schools  and MindUP are great programs designed for implementation in schools. Parents might be able to find a local private instructor, parent/child, or child-centered course to enroll in. They might find a therapist to engage their child in mindfulness-based therapy. There are numerous apps designed for children including Headspace for Kids and Mindfulness for Children. Parents willing to develop their own knowledge and skills might “home school” their child in mindfulness. Practitioners suggest that however a parent chooses to teach their child mindfulness, parents who also practice it themselves tend to have the greatest impact on their children.

I often recommend mindfulness meditation to the families of 2e learners I work with, as I do think it can help. I am concerned, though, that instruction and methodology can be a bit vague and many families may not know how best to go about it. Also, it’s not a “quick fix” but more of a “lifestyle change” requiring a  significant commitment to see results. I feel that the most benefit is gained when some rigor is put into implementation (e.g. scheduled daily family practice, instruction and ongoing guidance by a trained professional). Practice makes perfect!