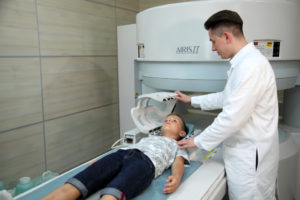 I’ve decided this series on alternative therapies will first tackle the mistakes I made myself as a parent. The last blog (Part 1) was on vision therapy as a cure for dyslexia. Today, in Part 2, I’ll address Dr. Daniel Amen’s Brain Clinics and how they purport to diagnose and cure ADHD.

He has 8 clinics in California, New York, Washington, D.C., Chicago, Atlanta, and Washington State. They claim to treat pretty much anything, from ADHD, addiction, anxiety and depression, autism, bipolar disorder, concussions, Lyme disease, marital conflict, dementia, and sleep disorders to weight loss. That claim alone should be enough to make anyone skeptical. Claiming to be an expert at everything is usually overreaching.

But let me zero in on how they “treat” ADHD.

I read Dr. Amen’s book: Healing ADD: The Breakthrough Program That Allows You to See and Heal the 6 Types of ADD when it came out in 2002. It sounded convincingly scientific. Neuroimaging was on the uptick and being heralded as a huge scientific breakthrough. Amen claimed he could cure ADHD by looking inside the brain with a single-photon emission computed tomography (SPECT) scan using gamma rays and with injected radioactive dye and tailoring treatment to 7 different types of ADD: Classic, Inattentive, Overfocused, Temporal Lobe, Limbic, Ring of Fire, and Anxious.

As my 2e son wasn’t responding to anything else we tried, the idea that he might have a specific subtype of ADHD that required a targeted treatment was appealing. So we paid a substantial fee and drove to an appointment at Dr. Amen’s first clinic in Northern California – somewhere in the Central Valley between San Francisco and Sacramento. We went through the intake process and were scheduled for SPECT scans. But something didn’t feel quite right, and I didn’t follow through. My response was instinctual at the time. But since then I’ve earned a PhD and reviewed the literature and scientific consensus from a more informed perspective.

First, there is no research evidence (other than what comes out of Amen’s presumably biased clinics) to support the idea that there are  seven different subtypes of ADHD. Real science – the kind backed by double blind studies, NIH supported grants, and published in reputable peer reviewed journals – has identified two types (Primarily Inattentive and Primarily Hyperactive/Impulsive). We’re kind of working on a possible third type tentatively called Sluggish Cognitive Tempo. There certainly is no such thing as “limbic” or “ring of fire” ADHD.

Second, to do a SPECT scan, the child must be injected with an IV carrying radioactive material directly into his or her bloodstream. Its radiation-emitting particles are carried to every part of their growing body. There is an increase in the possibility of cancer being caused as a result of this kind of radiation exposure, particularly for children, as their growth means more cells are dividing, providing a greater risk of radiation disrupting cell development. This is why they ask you if you’re pregnant before giving you a mammogram. The risk may be small, but it’s there.

Third, the idea that you can diagnose ADHD by looking at SPECT images of blood flow in the brain is a huge leap of faith. The key question in evaluating a diagnostic test is whether or not its findings are useful in determining what treatment the patient should have. SPECT scans are not FDA-approved for diagnostics, partly because they only have a 54 percent  sensitivity, meaning they are only accurate half the time. Scientists have yet to identify reliable diagnostic markers using far more advanced technologies such as fMRIs, which provides better temporal and spatial resolution. There is no scientific evidence to suggest that SPECT scans are a useful diagnostic tool for ADHD and can inform treatment plans. The American Psychological Association has twice issued papers that dispute “claims being made that brain imaging technology ... is useful for making a clinical diagnosis and for helping in treatment selections.” The most recent paper was the work of 12 scientists who spent three years assessing the latest research. The summary: “There are currently no brain imaging biomarkers that are currently clinically useful for any diagnostic category in psychiatry.”

None of the nation’s most prestigious medical organizations  — including the American Psychological Association, the National Institute of Mental Health, the American College of Radiology, the Society of Nuclear Medicine and Molecular Imaging, and the National Alliance on Mental Illness — validate his claims. Literally no major research institution takes his SPECT work seriously.

Here in New York, the extremely well-respected APA president and chairman of Psychiatry at Columbia University, Dr. Jeffrey Lieberman, says: “In my opinion, what he’s doing is the modern equivalent of phrenology…The claims he makes are not supported by reliable science, and one has to be skeptical about his motivation.” Former director of the National Institute of Mental Health, President of the Society for Neuroscience (the leading professional organization for neuroscientists), and director of the Center for Psychiatric Research at MIT and Harvard, Dr. Steven E. Hyman, says: “I can’t imagine clinical decisions being guided by an imaging test.” Dr. Thomas Insel, director of the National Institute for Mental Health, says “entrepreneurial zeal capitalizing on scientific advances needs to be tempered by reality checks.”

Dr. Amen thinks he’s a “maverick” onto something that no one else in the field understands. I guess I might respect that (I do like mavericks) if he weren’t a self-promoter making a ton of money by preying on the fears and hopes of desperate families using invasive, potentially dangerous, and ineffective technology. Don't be fooled by his brand of pseudoscience.